Across the globe major cities are starting to make serious inroads into reprioritising road-space, providing more space for public transit, cycling, and providing a greater focus on pedestrian accessibility and safety. From Bogota to New York City planners are bringing major intersections into the 21st century and implementing the pioneering design standards developed by the Dutch.

Making progress has not, and is still not, easy. Our cities have been planned around the motor vehicle for so long that it takes clarity of vision and a great deal of patience and persistence to change the perceptions of those who stand against change, and those who need to be convinced that change is necessary.

Most people do not realise just how car-centric our city infrastructure is. The first response by many to proposals to reduce street parking, the number of lanes, or reduce speed limits is usually negative. For many it is at first unfathomable that these changes could be proposed, or in any way seen as producing a net positive to society. Yet evidence from across the globe, from major global cities to smaller centres in the developing world, shows that realigning our road space works, and works well!

One of the most common criticisms, especially to projects such as the development of cycling infrastructure is that there is just no space. Let us look at that a bit closer using the example of the important ‘Five-Ways’ intersection in Port Elizabeth, South Africa.

What do we see when we look at the satellite image below? A lot of lanes? What else? 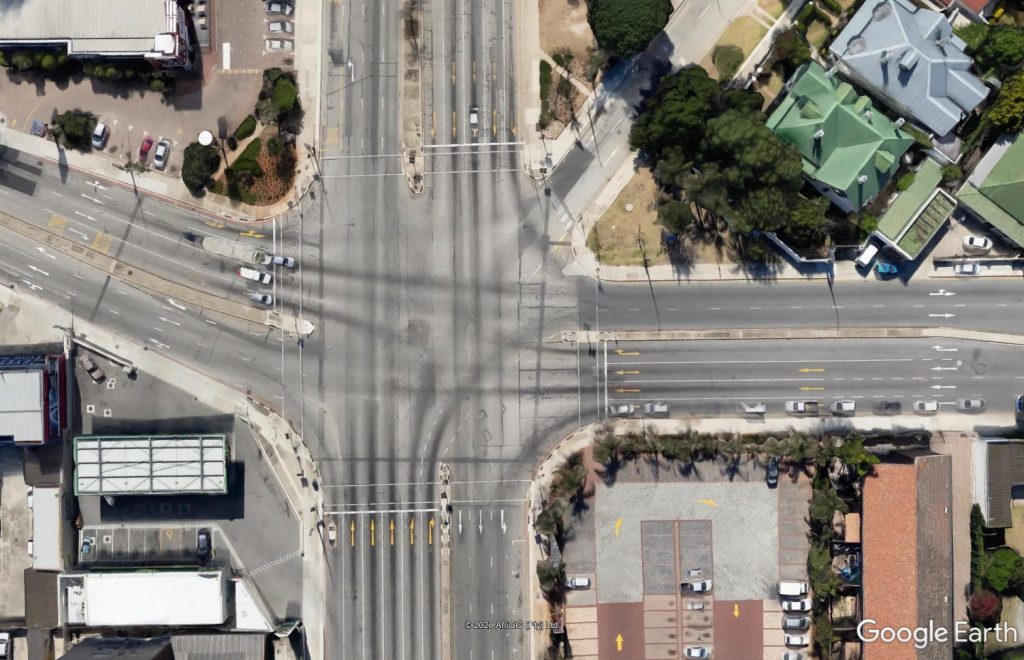 You should see those black lines on the road. Those are marks left behind from cars made by drops of oil and exhaust fumes. Looking at them you can see just how much of the massive Five-Ways intersection is being used. You can also see just how much road is hardly being used at all.

Just look at how much space car lanes take up! Central is a densely populated area, being one of the few places in Port Elizabeth with apartment blocks. It is also home to many shops including a major supermarket. But look at how unfriendly this landscape is for pedestrians. If there was ever to be a place in our cities where pedestrians should be prioritised, it would be in a densely packed community such as central. But the roads are wide, the corners have gentle curves so cars don’t have to slow down much, the lines on the road are faded and there is no real protection for pedestrians when crossing the road other than a ‘beg-button’ at the crossing points.

And then of course there is no provision for other forms of transport. In a community such as central, with so many apartment buildings and nearby amenities cycling should be extremely popular. That it is not is not an indictment on the appeal of urban cycling, but on the hostile environment created by car centric infrastructure. Would you take your children cycling down Cape Road or through the massive Five-Ways intersection?

Let us take a look at what Five-Ways could look like if a small investment was made into providing new infrastructure for cyclists and pedestrians.

First things first, let us reduce the size of the intersection a bit. Making the intersection smaller will have the effect of slowing cars down (which in a highly populated area is no bad thing) lowering the risk of accidents, improving pedestrian safety, and lowering noise.

Next let’s look at putting in some protected cycling lanes. We’ll use best practice design principles and put mono-directional cycle lanes on both sides of the road. We’ll also paint them a bright colour (blue in this case) to provide a strong visual sign that this is a space for cyclists. At intersections this will also provide a sign to vehicles not to trespass onto the blue paint.

Cyclists will use the intersection as if it were a roundabout, traveling clockwise around the intersection remaining on protected infrastructure the entire time and at no point having to move across the intersection into car lanes. This means that motorists and cyclists each of their own space and should not encounter each other. Now there will be those that argue that we should not be putting down cycling infrastructure when so few people cycle. To these people I would point to the countless examples of infrastructure around the world (e.g. London and New York) have seen major increases in cyclist traffic. I would also add my favourite quote by the famous urbanist Brent Toderian: “It’s hard to justify a bridge by the number of people swimming across a river

Turning to pedestrians, we’ll add additional curb space (grey) to further protect the cycle lanes and act as waiting areas for pedestrians wanting to cross the road. These curbs act to narrow the intersection and forces cars to go more slowly around corners. It also means that the distance pedestrians need to walk to cross the road is greatly reduced. This improves accessibility for all pedestrians but especially for the elderly, children, or differently abled who may move slower than the average person. 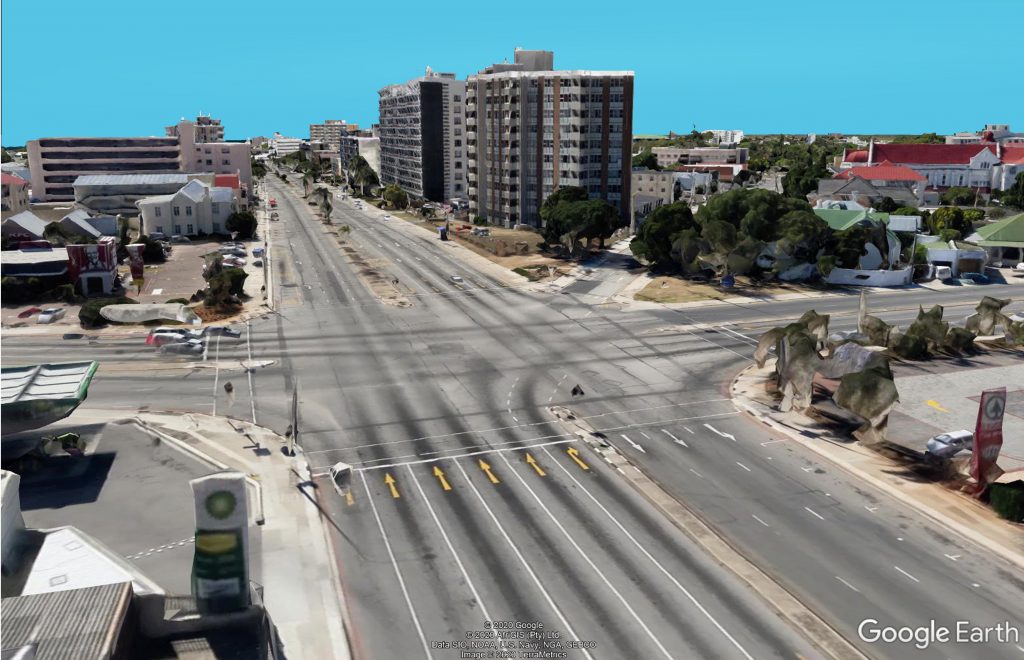 Next we’ll paint the pedestrian walkways in bright colour (red in this case) to provide a very clear visual signal that this is a pedestrian space on which cars should not trespass when pedestrians have the right of way.

To further simplify the intersection (and thus improve its safety), and to provide additional space for pedestrians let’s close off Park Lane to motor vehicles. We might have to call it Four-Ways in future but there is no reason why access to Park Lane is necessary at Five-Ways. Park Lane and Park Drive beyond it can be accessed easily enough through Dickens Street or King Georges Road where vehicles coming from the opposite direction must already travel due to the Park Lane access road being one directional only. This will free up this section of Park Lane for a small public space.

So what do we have to give up in order to make this happen? Not much at all is the answer. One car lane can be sacrificed on Cape Road (bottom of the image below) where there are a frankly ridiculous 6 lanes in place at the moment. Some on street parking down Cape Road would need to be removed too and car lane widths reduced on other roads to accommodate new cycling lanes. 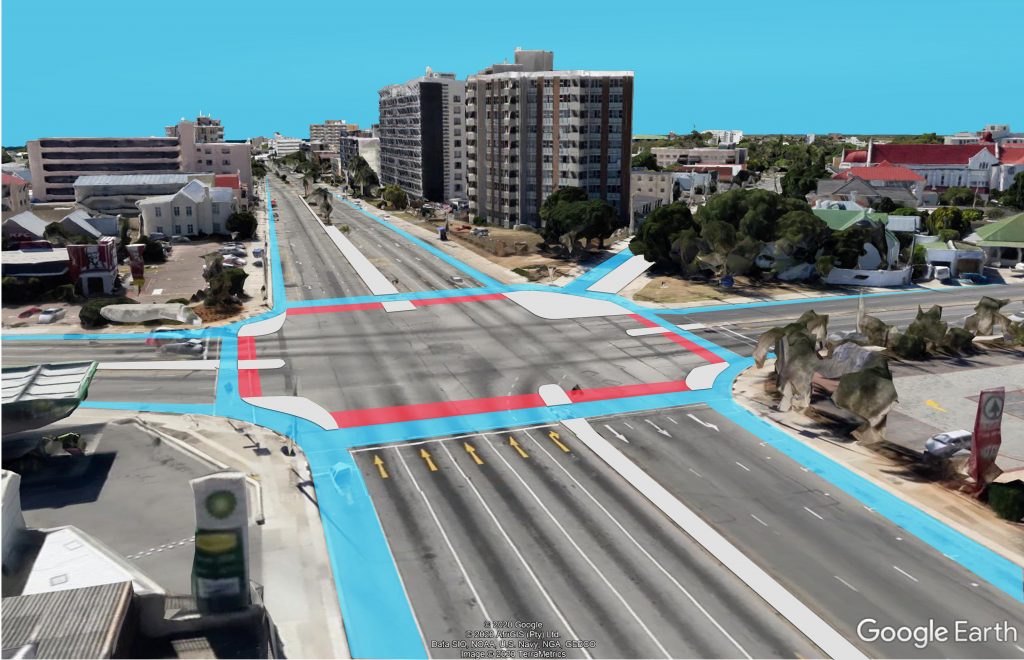 Those worried about access to shops and apartments needn’t worry too much. Although on  street parking takes up a lot of space visually there are really not many parking bays that would be lost. For example, In the 210 metres between Dickens Street and the Five-Ways intersection there are only 15 parking bays on the one side of the road and 12 on the other. There is even less parking available on the other side of the intersection towards Salisbury Avenue.

Vehicle parking would still remain in Westbourne Road and the side streets, and with some minor investments parking in these roads could easily be increased to compensate for the loss of on street parking. But the loss of a few parking bays should not prevent the development of infrastructure which will fundemantely improve the mobility environment for thousands of pedestrians, motorists, and cyclists.

When teamed with efficent public transport, interventions like these can fundamentally change the shape of our cities, improve public safety, promote more active lifestyles, and reduce pollution. But the issue of our public transport system is a topic in of itself, and for another time.

Our cities are full of examples where  simple solutions and small investments can drastically improved the accessibility and safety for pedestrians and cyclists. The rest of the world is already working on this, we should follow suit. In Nelson Mandela Bay especially we have the potential to dramatically improve our mobility environment and even become leaders in Africa in sustainable mobility.